Kim Ji Eun Shares Thoughts On Conclusion Of “Again My Life,” Most Memorable Scene, And More

Following the conclusion of “Again My Life,” Kim Ji Eun has looked back on the drama and her role!

SBS’s “Again My Life” is about a talented prosecutor who gets a second chance at justice after failing to bring down a powerful individual. Kim Ji Eun stars as Kim Hee Ah, a genius and the youngest daughter of Cheonha Group’s CEO who teams up with passionate prosecutor Kim Hee Woo (Lee Joon Gi).

Now that the drama has come to an end, Kim Ji Eun commented, “To the point where I’d want to return to the start of filming if I had the opportunity to turn back time, it was such a fun and meaningful period where I got to look back on myself. It was such a precious time because I got to work with all our staff members, in addition to the director, as well as my amazing senior and junior actors. Everyone, you’ve worked so hard.”

Kim Ji Eun continued, “Lastly, I want to say thank you to all the viewers who enjoyably watched and were with us for these precious times. If there ever comes a moment where you want to try life ‘again,’ I hope you will find hope and comfort through ‘Again My Life.’” 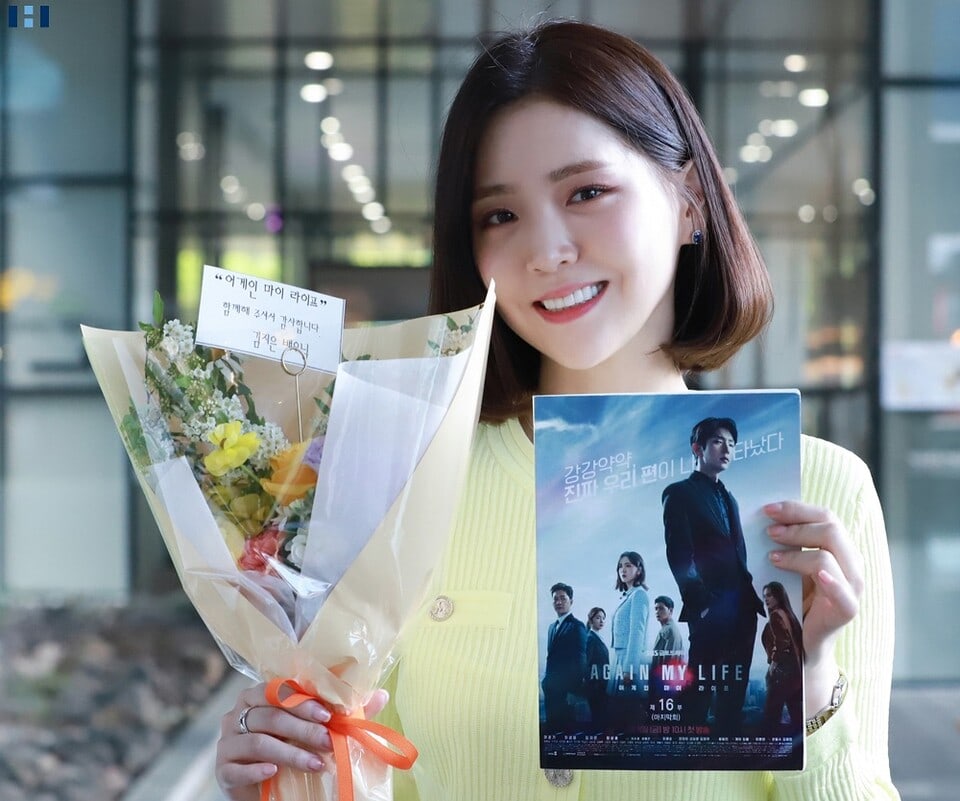 The actress thought back to when she first learned about her character, saying, “When I first met the bold yet lovable Kim Hee Ah, I thought a lot about how I should portray her. As she’s a character with a big narrative, [I wondered,] whether I’d be able to do well, and I wanted to try to express the process of fighting for her family and [Cheonha] Group in a flexible manner.”

Kim Ji Eun added, “Although there were some regretful aspects, I think I was able to portray the character well thanks to all the help I received from the director, who always views the big picture, and my senior actors. I learned a lot within that journey so I am grateful to have been able to act as the character of Kim Hee Ah.”

When asked to pick the most memorable scene, Kim Ji Eun answered, “In the drama, Hee Ah realizes that Hee Woo’s actions and goals she suspected are the same as hers, and I think that moment of ‘If we can’t cut ties, I will personally move forward,’ is the motivation that helps Hee Ah decide she will stay with him. That’s why that scene where she decides to work with Hee Woo, whom she trusts, was the most memorable.”

Lastly, Kim Ji Eun shared a message to viewers, saying, “Thank you for being with ‘Again My Life’ until now and supporting our fight against evil. I was happy to meet you as Hee Ah, to the point where I am proud of the fact that I’m a part of this project’s team. I hope those sentiments were also conveyed to viewers and I will seek you out again with another good project and good acting. Please continue to give me lots of love and attention!”

“Again My Life” aired its finale on May 28, which recorded an average nationwide rating of 10.5 percent, successfully concluding its run at No. 1.

In case you missed it, start watching “Again My Life” here!