How time flies! Eight weeks and “Sh**ting Stars” has come to an end. We have marriages, babies, vacation trips, and romance galore as our time with our favorite people at Starforce draws to a close. So what does each one’s happy ending look like? Here are our favorite romantic moments from the final pair of episodes!

Warning: spoilers for episodes 15-16 below.

1. Tae Sung cutting every sort of deal to learn more about Han Byul 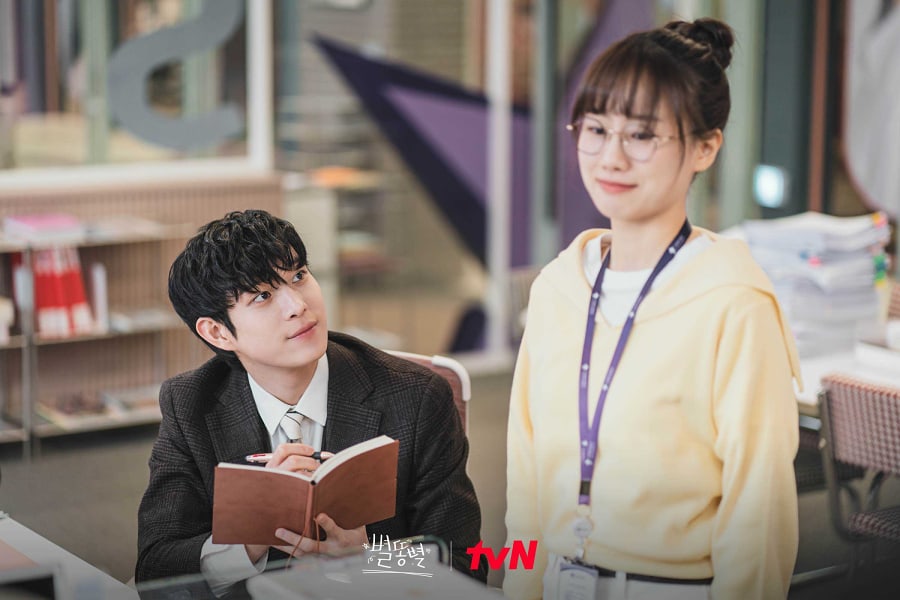 As much as we know about Gong Tae Sung (Kim Young Dae), we know very little about his girlfriend Oh Han Byul (Lee Sung Kyung), and the show makes sure to let us know that it’s aware of this imbalance. Tae Sung is bewildered to realize that Han Byul has a pair of twin siblings (really was hoping for a cameo there) and an entire home life he knows nothing about. Not one to give up, he immediately barters every skill he can think of to obtain more information about the woman he loves. 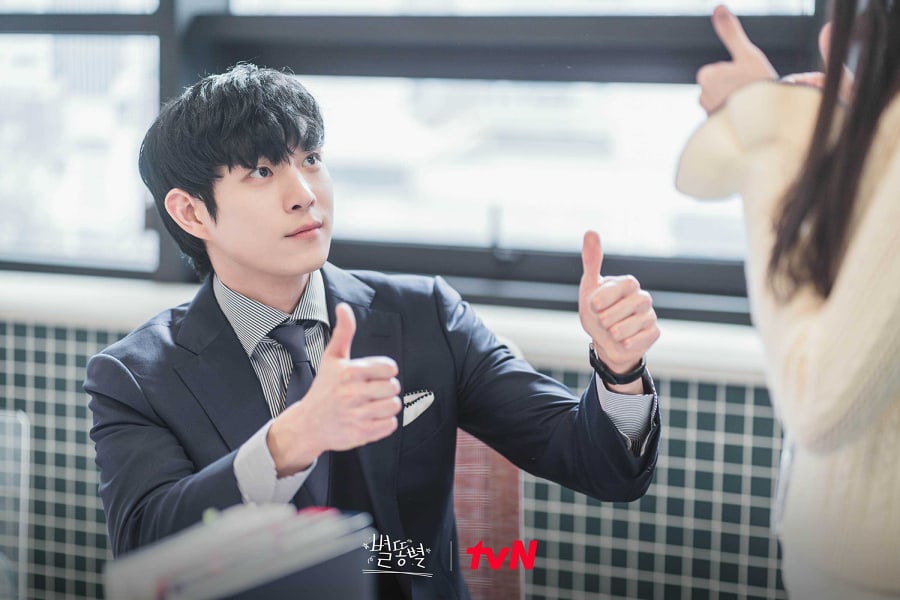 The trouble is that those skills are… questionable. A phone call for the PR team when they’re busy? Tae Sung to the rescue! He answers the call and promptly gives everyone a headache by announcing that he wants to star in a workplace drama next: Han Byul’s favorite genre. Can’t date Han Byul in the open because his fans could revolt? Easy, he’ll “method act” by cosplaying as a CEO at Starforce. He gleefully assures a skeptical Han Byul that only a few people know that they’re dating so this will allow them to mix business with pleasure. 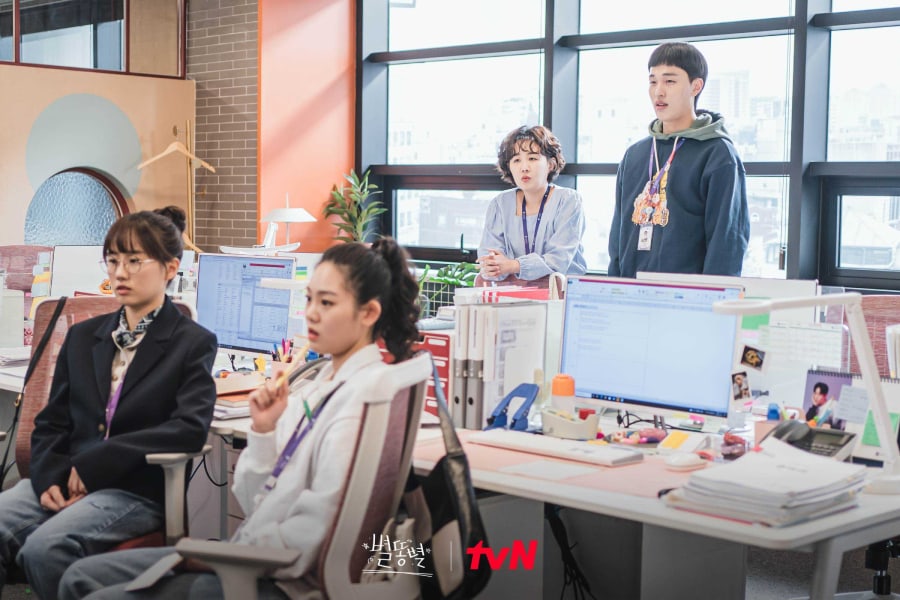 Only, Tae Sung gets in everyone’s way. Choi Ji Hoon (Ha Do Kwon) is at his wit’s end, and the resulting upheaval reveals that everyone at Starforce knows that they’re dating but are pretending because the poor idiots in love keep trying to keep it secret. After messing up the photoshop on his own face, writing a journal article as a press release, and making the same mistake Byun Jung Yeol (Jin Ho Eun) did by using scrap paper for important photocopies, all of Starforce sets Tae Sung on removing mail labels. But they can’t help admiring his devotion to Han Byul. And he isn’t the only boyfriend of the year.

2. Yoo Sung tying with Tae Sung for boyfriend of the year

Kang Yoo Sung (Yoon Jong Hoon) is such a breath of fresh air. There’s no drama or subterfuge with him. When a member of the production team for his actor’s upcoming dramas asks if he’s single, he says without hesitation that he has a girlfriend. When the girl who’s asking goes as far as to ask if he intends on breaking up soon, he promptly assures her that he loves his girlfriend and has no intention of breaking up with her. Eavesdropping on the conversation, Park Ho Young (Kim Yoon Hye) is over the moon. Yoo Sung is transparent with his affections at work and outside of it, and he doesn’t try to hide that he’s dating out of some overinflated sense of professionalism. Their feelings don’t get in the way of their work. If anything, they work harder than ever because they love what they do just as much as each other. Healthy couple behavior 101!

Now this was a surprise. Yoon Jae Hyun (Shin Hyun Seung) and Jin Yoo Na (Lee Si Woo) went from newbie actors who couldn’t stand each other to being mad for each other. They’re both a little immature in many aspects. He’s sweet but naive, and she’s spoiled but affectionate. So it comes as a massive surprise when Yoo Na finds that… she’s pregnant. Jae Hyun sweetly, immediately grabs the twist-tie from a loaf of bread as a makeshift ring and vows to marry her, but their respective managers Yoo Sung and Han Dae Soo (Kim Dae Gon), as well as Han Byul, nearly have a stroke. 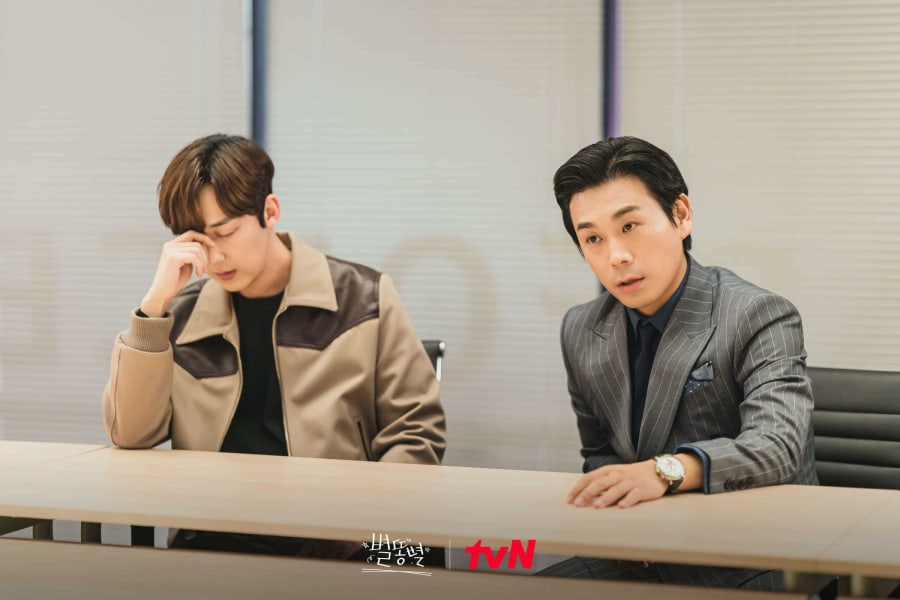 Both don’t know how to tell the lovebirds that their careers have just begun and want to berate them for why on earth they let this happen. But they’re getting married in a week, so there’s nothing to do but wish them the best. Privately, Yoo Sung tells Ji Hoon that he hopes everything goes well for the two in the future. They’re both so young. Yoo Sung also notes that being an actor was Jae Hyun’s dream. He spent years as a trainee, building up his roles through bit parts. He just got a second lead role that was received well, and this was the start of what could have been an illustrious career. But life has a way of working out at times, and we leave Jae Hyun and Yoo Na as getting tons of sponsorships for married couples like rattle ads. So, perhaps all isn’t over yet. 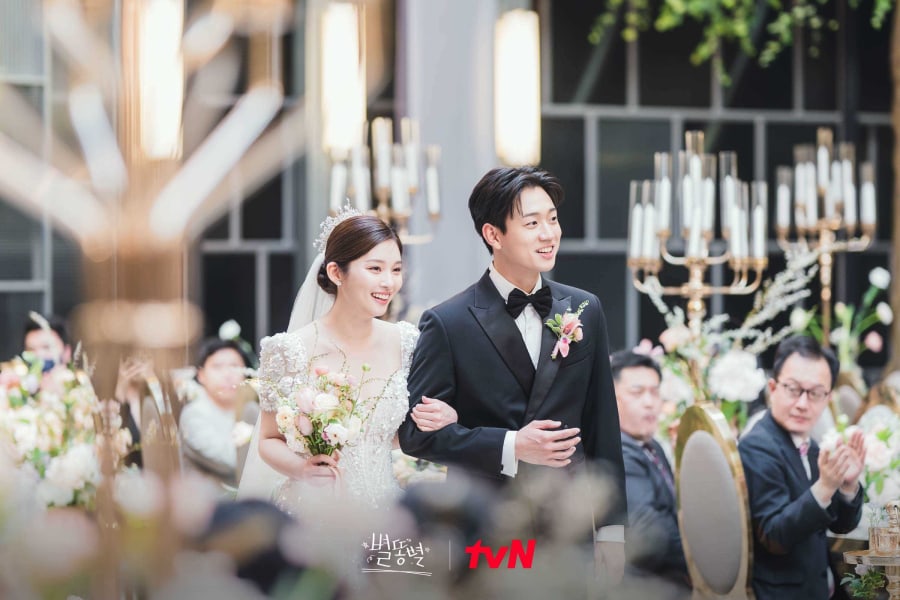 4. Soo Hyuk and Gi Bbeum finally getting together 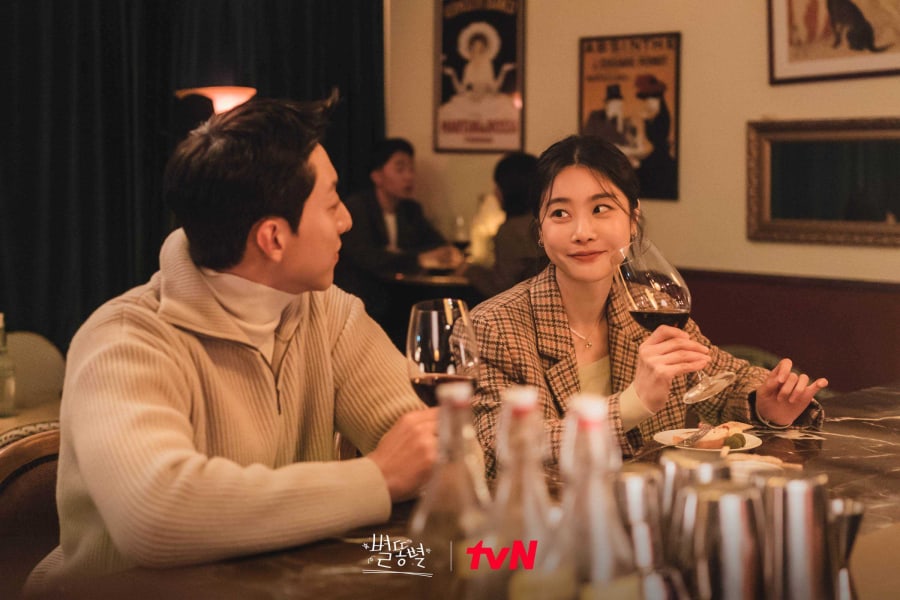 Do Soo Hyuk (Lee Jung Shin) and Jo Gi Bbeum (Sojin) have always been the most interesting couple in this show. There’s something about their laidback, mature vibe that makes them perfect for each other in a unique way from the other pairs. Tae Sung is an adorable drama king, Han Byul is a stressed career lady, Ho Young is a cheerful go-getter, and Yoo Sung is the warm, intelligent new head of Starforce. Both Soo Hyuk and Gi Bbeum, however, are not as directly involved in the entertainment industry. They watch it from the periphery with the weariness of people who wonder why on earth these strange people do what they do. 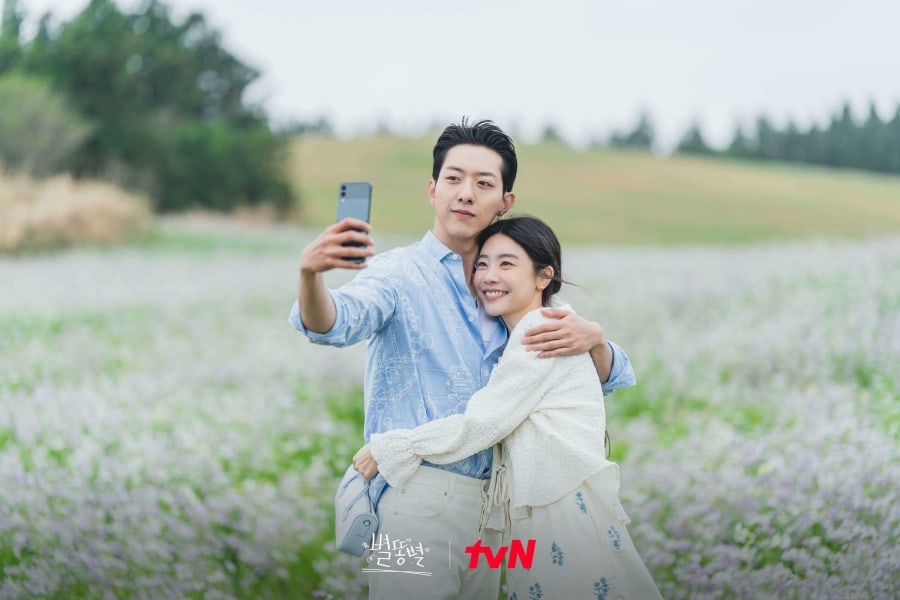 The finale doesn’t give us too much of this couple but what we do see is a quiet romance of two people who are excellently matched intellectually and emotionally. They’re both a little more stern and no-nonsense than Han Byul and her crew, but they make great friends and even better life partners. A happy ending well earned!

5. Tae Sung and Han Byul admitting to their relationship

This show had only one question left to resolve as we entered the finale, and that was: just what’s going to happen with Han Byul and Tae Sung’s romance? Given the show’s focus on realism, it would have made sense to have them date in secret for a long, long time. But the show also proved just how difficult it was for this couple to do so. Perhaps Soo Hyuk and Gi Bbeum would have been able to make that work, but not these lovebirds. We leave our beautiful couple on the happiest of notes as Han Byul finally has a realization after a few days spent trying to have a secret vacation trip with Tae Sung: there is no such thing as utter privacy. There will always be someone who recognizes him. There’s always the risk of detection. And hiding away every one of your happiest moments is really no way to live. 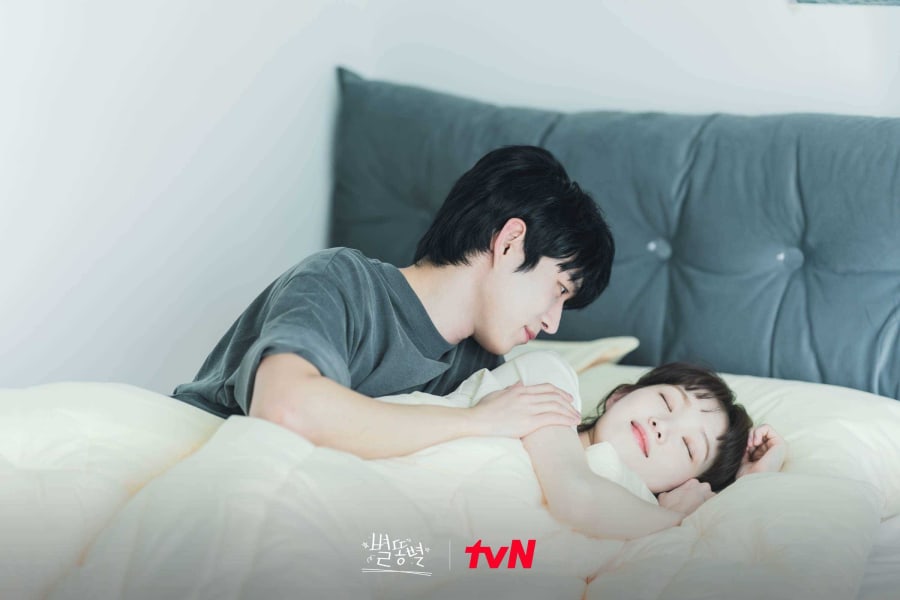 For his part, Tae Sung has been very respectful of Han Byul’s desire to keep the romance low. If it were up to him he’d have announced it immediately, but he understands that it would place a massive spotlight on her. So when Han Byul gets a call from a reporter saying that Tae Sung was spotted on a trip with a non-celebrity, she knows that the jig is up. Even if they deny it and make it out safely, this will happen again. And everyone deserves a bit of happiness. The look on Tae Sung’s face when she says that they’ll be making the romance public is priceless. They embrace under the sun and by the sea, while the PR team wearily laughs that they have their work cut out for them. 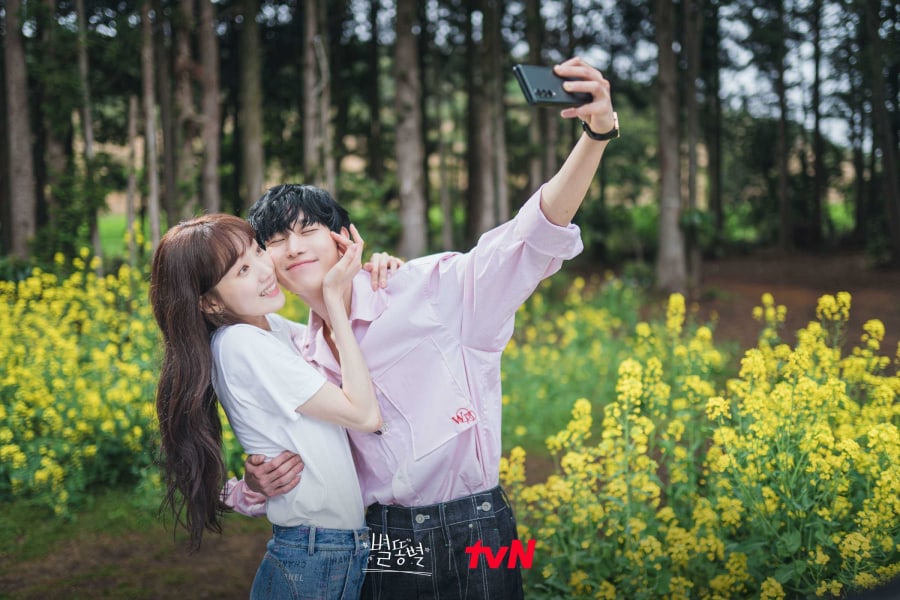 And life goes on afterwards. Ji Hoon goes on that vacation to see Eun Si Woo (Choi Ji Woo) after giving his position to Yoo Sung. Ho Young is promoted. Soo Hyuk sighs ruefully when Gi Bbeum has to work late but is ever ready to pick her up. And our star and his head of PR? They couldn’t be happier.

This was just a wonderful weekend drama. It’s a shame it started off on the worst foot ever because the rest of this show was actually quite lovely. No ugly drama, no noble idiocy, no unnecessary breakups, just people working hard at what they do well (in Soo Hyuk’s and Gi Bbeum’s cases) and what they enjoy (with respect to the rest of Starforce). The cast seems to have had a blast making this show as well if the behind-the-scenes shots at the end of the last episodes are any indication. And that’s always the best kind of show to see: where the actors had as much fun as we did. Farewell “Sh**ting Stars”! Despite the title, you were golden!

Check out the drama below:

What did you think of the final episodes? Let us know your thoughts in the comments below!

Shalini_A is a long time Asian-drama addict. When not watching dramas, she works as a lawyer, fangirls over Ji Sung, and attempts to finish up the greatest fantasy romance of all time. Follow her on Twitter and Instagram, and feel free to ask her anything!